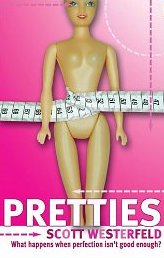 Pretties is the second book in Scott Westerfeld’s series of four books about Tally Youngblood living in a future where everyone gets to be pretty when they celebrate their 16th b.day. First book was called Uglies, read my post about that one here.

Pretties takes off some time after Uglies ended. Tally has had her operation and is now finally a pretty, who has seemingly forgotten all that happened in Uglies and all the new things she learned about the pretty making operation while she stayed in the rebellious camp with the Smokies. Life is about being pretty, party and have fun. But something keeps tugging Tally’s pretty brain, and after Zane, one of the popular pretty boys, and her becomes friends and Tally join the popular clique The Crims, she realizes that something is definitely off with being so pretty and carefree. She knows that there is something more, and she knows that time is running out if she ever wants to make something out more of life than just being pretty and stupid.

Soon Tally and Zane and the rest of The Crims make plans, and Tally may be headed into her biggest adventure yet. Not without costs, as Tally learns along her path to become another and maybe more whole person.

I found this one a bit more interesting than the first one, and I am looking forward to read the next book called Specials. I am still not totally crazy about the series, but it keeps getting better. This review is sort of thin, but I can’t reveal too much without spoiling what happens in the first book.

4 Reply to “Pretties by Scott Westerfeld”