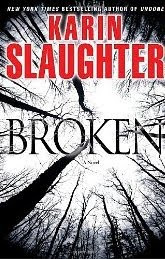 I am not really sure if Broken by Karin Slaughter is book # 4 in her Atlanta-series or if it is an installment in the Grant County-series. Her book Undone, which came out in 2009 combined the characters from the two series for the first time, and this one does it was well. Anyway, Broken takes place in Grant County, so I guess that it is a Grant County-series book, although we have special agent Will Trent of the Atlanta-series coming down to Grant County to help out Sara Linton.

Sara is home in Grant County for the first time in 4 years. 4 years has passed since she had to move away, and she has not felt the need to come home. And she doesn’t feel the need now, but it is Thanksgiving, and her pregnant sister, who is a missionary in Africa is also home for Thanksgiving. So Sara goes. Reluctantly. There are people down there whom she doesn’t care about meeting at all, one of them being the detective Lena, with whom Sara share a dark history.

Sara has not been home for many minutes, before she receives a call about a young woman who has comitted suicide. Sara, who used to work a a coroner and pediatrician when she lived in Grant County, does not want to get involved in anything which has to do with the police force of Grant County, but after she receives another call, this time from Frank, one of the police officers of Grant County, she reluctantly goes to see him at the police station where Frank has a problem.

Sara senses that something is completely off, and since she just doesn’t trust any of the local police force, she makes a call, and Will Trent is sent her way. Will is not welcomed by Grant County with open arms. The small community does not want to have anything to do with him, a fancy agent from Atlanta, but the case becomes more and more complicated, and it si clear to both Sara and Will that something is going on. Not just with the case, but with the police force as well.

Broken is a great mystery, although not of the cosy kind, which none of Karin Slaughter’s books in the Grant County or Atlanta-series are. The characters are bruised, selfish, mean, violent and there are seldom any redeeming parts. Slaughter’s books has definitely grown on me (or else I have just become used to them), because I could not stand the first ones, where especially characters such as Lena annoyed me to no end. But the series kept intriguing me, and this one is also a great read. I do suggest reading her other books before reading this one, since there are spoilers in this one about what happens in previous books.

PS. Sorry I said Grant County so many times!

4 Reply to “Broken by Karin Slaughter”