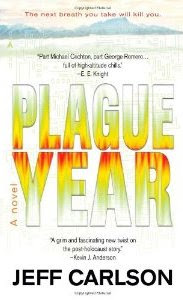 Plague Year by Jeff Carlson is the first in a trilogy. It is a post-apocalyptic tale about nanotechnology gone wrong, wiping out most of the world’s population except for those few, scattered survivors plus a crew of scientists aboard a space station, where they’ve been since before the nano-plague began, and they have been floating up there in space for a year. They are getting restless and want to come back to earth to begin helping out finding a cure for the plague.

It all began when scientists developed a nanotechnology which was meant to cure cancer. Somehow some technical thing went wrong, and the small nano-bots ended up eating people from the inside instead within a few days, and the nano-bots spread all overt he world. Only thing is that they cannot survive in high altitudes (10.000 ft), so atop a Califonian mountain we find a group of survivors, who, after a year of hunger and cold and bouts of cannibalism, are desperate to find a way out.

We also follow the crew on the space station, and how they try to persuade the emergency-government to be let back to earth again, where they can help finding a cure for the nano-plague.

There are several main characters in this story, and while the character descriptions and developments were not the best, and while I felt the plot was all over the place from time to time, the worst for me in this book was simply that I didn’t understand half of it. That MAY be because of language barriers, but I am more inclined to think that it also had to do with all the technology- and space goobledygook there is throughout the book. I couldn’t grasp it, and felt that a part of the explanations of when, why and how was lost.

That said, the story certainly picked up in the last third of book, and I am now eagerly waiting to read the next one in the trilogy.