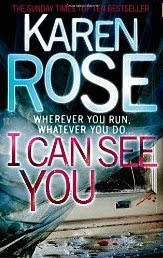 I Can See You is the first novel by Karen Rose that I’ve read. It seems like there is a prequel to this story called Don’t Tell which also has Eve Wilson as the main protagonist. I did not suspect that there was a previous book about Eve, and thought that all the happenings mentioned in this book about Eve’s previous life was just an extra touch to the story. Anyway, it did not disturb the reading of this one, although I am not sure I am going to read the first one now.

Eve is a young woman, mid-twenties, living in Minneapolis, tending a bar to earn money and studying psychology during the day. She is a scarred woman, literally speaking, and has not had the easiest life. She is still coming to terms with a dramatic and traumatic past, but things are beginning to look brighter, not just because time heals all wounds, but also because Eve is working on it, reinventing herself with a determination to succeed.

She is in the middle of writing her thesis which is about online gaming and how you can train to get more selfesteem online and also make it work irl. She is a bit worried because some of her test-persons are showing addictive behaviour, being online in a virtual world (called Shadowland here, which must be an equivalent to places like Second Life etc) almost 24/7.

When one of her test subjects, Martha, is killed, the Minneapolis Hat Squad is called in (the detectives are called the Hat Squad because they wear fedoras), one of the detectives being the very handsome and sexy Noah Webster, also a troubled soul with a tragic past. Eve soon finds herself in the middle of the investigation, having access to Martha’s online life. But it seems like the killer is always one step ahead of the Hat Squad and Eve.

To be honest, I have to say that I DID enjoy this book and found it well written. But I am so sorry! There were things and details which annoyed me a lot. First of all, I found both Noah and especially Eve to be too good. Eve felt one dimensional in all her goody-goody glory, even though the author has been kind enough to let Eve be able to use naughty language from time to time. The other thing that annoyed me was the badly developed and throughly boring romance developing. For Pete’s sake!!! If I want hot romance, I choose a romance novel, not a mystery with a badly described love story. That said, I could easily pick up another Karen Rose thriller (although I suspect the rest of her works are developed from the same murder mystery/sexy romance formula), but would rather read something else for the time being.

4 Reply to “I Can See You by Karen Rose”