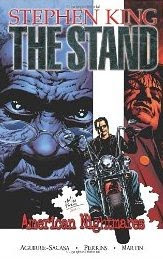 American Nightmares is Volume 2 in the graphic edition of Stephen King’s The Stand. I have previously read Volume 1 which you can read about here. The grahic edition still follows the original storyline from the book by Stephen King, and we are now in the very last stages of the superflu that killed more than 99% of the people in the world. Those last ones are dying, but most have died already and are now lying around in houses, jails, buildings, cars and other places, just lying there rotting away or drying out like mummies. But there are still some survivors, who are immune to the superflu virus, and they find themselves in a scary, new world. We get to know more about Harold Lauder, Fran Goldsmith, Stuart Redman, Larry Underwood, Nick Andros and other survivors that we can label “the good guys”. But it is not just good guys who have survived the superflu. Bad powers are lurking and gathering strenght. And I can’t wait to get my hands on Volume 3, which is due out this summer. A great read that can be enjoyed without knowing the story from the book, but knowing the storyline and the characters in advance does help.

6 Reply to “The Stand by Stephen King: American Nightmares by Roberto Aguirre Sacasa”