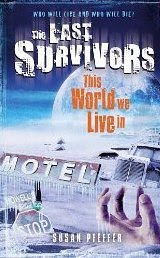 The first book – Life As We Knew It – is reviewed here, and for the second one – the dead & the gone – you can find my review here. I absolutely loved Life As We Knew It and it took a while to get the story out of my head again, and I still think about it from time to time. Book two was also a fantastic read, and I really liked it, although I was more fond of Miranda’s voice of Book one than with Alex’s voice of Book two.

Book three combines those voices, and while I read the book in one sitting and while I was engrossed and entertained, I have to admit that the world they live in has now lost it’s “novelty” to this reader. Of course, this book is about what is going to happen when we meet the families almost a year after the moon crash. And the descriptions of how the characters interact, grow up and make life just barely bearable, is very well done. I will not reveal too much, but I don’t think it has escaped any reader of this series, that Miranda and Alex actually meet in this final book. What happens besides that, you will have to read for yourself. All in all this was a good read, and a fitting finale, although there was a slight lack of steam in the writing, which I have found to be present in the two previous books. A fourth book in the series maybe looking at life after some more years have gone, is not a bad idea though, and I know I will read it!