Stitches by David Small is a graphic novel and a memoir and probably one of the most moving novels I’ve read in a long time. Since the story is about a young boy, David, who loses his voice, a lot of the book is actually just drawings, but what drawings! David’s other family members are not huge speakers either, so even though the book has more than 300 pages, it is not difficult to read in one sitting. If you can bear it, that is. 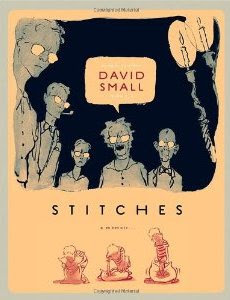 The story is basically extremely tragic. David grows up in the 1960’s Detroit-area with his parents and older brother. Both parents are distant and barely talk to each other or to their kids. You sense from the beginning that they are difficult persons. David’s childhood is gray, he rarely sees his parents smile or be happy and when visiting his grandmother, he also figures out that something is wrong in that household. David suffers from nightmares and is a somewhat anxious child.

On one of the few occasions where he has actually drawn his mother as a smiling woman, she is hosting a party. One of the other women at the party notices a lump on David’s neck, which she insists that his parents have checked immediately. Since his father is a radiologist and a doctor, this turns out to be no problem. The lump is then removed, but some years after that first operation, David has to go back for a second one, and after that operation, he wakes up having lost his voice.

Slowly he discovers dark secrets and embarks on a life on the edge, feeling invisible without a voice. I will not reveal more about the story, but if you like memoirs and also graphic novels, this is a must.

13 Reply to “Stitches by David Small”