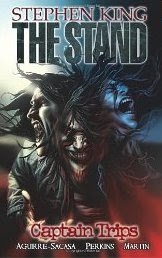 I’ve already read The Stand by Stephen King. Numerous times. The “short” original version, the long “uncut” version, the English version and the translated version in Danish. Yes, The Stand is one of my absolute favorite reads, and has been that since I read it for the first time many years ago. And I like it even more every time I re-read it. But I’ve never re-read it as graphic novel:

So even though I know the plot and the characters very well, I didn’t doubt for a second, that I should get that one, when I saw that Marvel Comics had released The Stand as a graphic novel. I have never seen any of the tv-series made over the book, so I was curious to see how the characters looked in the mind of the makers of this graphic novel. 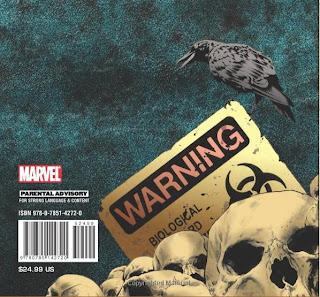 Since The Stand is a very long book – and probably also for economical reasons – Marvel has chosen to cut the novel into several volumes. First part is called Captain Trips. The title is the same name that the super flu, which wipes out almost all of mankind, has in California. The drawings made by Roberto Aguirre Sacasa are very good. I don’t really know anything about Marvel’s universe, cartoonists, texters, colorists or series, and I actually like the more oldfashioned style, like Tintin, better. But I really liked Sacasas drawings in this first part of The Stand. Very scary and gross and also much like the images I had in my head before.

The plot in the graphic novel follows the written book (the long “uncut” version) very well although some scenes are left out because of space. So if you don’t know the story but want to, you still need to read the “real” book.

A bit about The Stand that I wrote in an earlier post:

The book was first published in 1978 and is thus one of the earliest of King’s works. 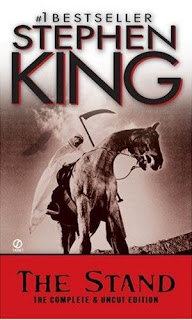 Imagine the 99% of the world’s population wiped out by a flu virus and only inhabited by a few, scattered survivors. The book’s location is “just” USA, but that is definitely large enough to make you really feel the chilling atmosphere of an almost empty world. Inhabited by scared

and shell shocked people, trying to come to terms with this new “situation”. SK manages to paint a large picture with a lot of great character development both pre- and post apocalypse.
It is not just interesting – it is fascinating, chilling and thrilling to follow the characters as they come to terms with their new world and not to forget their new world order. Because it pretty soon becomes clear that the real horror was not the flu wiping out the world’s population. The real horror is still looming in the horizon after survivors begin to gather in Boulder, Colorado and Las Vegas, Nevada.
American, Fiction, Graphic Novel

2 Reply to “The Stand by Stephen King: Captain Trips by Roberto Aguirre Sacasa”