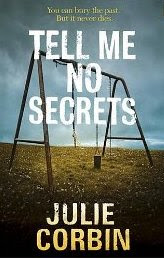 Tell Me No Secrets is a mystery and Julie Corbin’s debut. As such it is a great little book with a relatively tight plot, and the persons seem believable. Almost. On the other hand I can’t say that I was overly impressed, because this one didn’t catch me at all. That is not the author’s fault, of course, I just don’t think I really ogt my money’s worth with this one.

Grace, happily married mom to two teenage girls, lives in a small Scottish town, where life goes on as it always has. People live their lives in a quiet manner, there is gossip, of course, but for the most part life is quaint and calm, save for the unruly Scottish weather. Grace and her family are about to move to Australia for a period of time, but the pretty picture har its dark spots, because Grace is carrying a secret, which has marred her all her adult life. This secret is about to be revealed, threathening to ruin Grace’s life, her marriage and her relationship with some of her closest friends in town. Not to mention her relationship with her ageing parents and it will also ruin the whole plan of moving to Australia.

Grace will do anything to keep the secret a secret, and during the course of a few hectic weeks, the situation goes from bad to worse. Her childhood friend, wild and promiscous Orla with the flamboyant French mother and the quiet Scottish father, is threathening Grace on the sidelines, and Grace feels a hatred burning inside her that she didn’t thought herself capable of feeling. her colleague – and highschool sweetheart – is the only other person aside fron Grace and Orla who knows about the secret, and soon Grace doesn’t know which side to turn to. Her marriage, build on somewhat unsteady ground, begins to crumble when the skeletons start falling out of the closet.

Like I said, the plot is fine, although seen before. The characters who seem believable in the beginning, loose credibilty as the story progress, and all in all I found the storyline kinda un-exciting. But the premise is good, just too bad there wasn’t more in Tell Me No Secrets for me. Julie Corbin seems like she is upcoming, and we can hope that her next one will be better. All that said, for a rainy day or a day at the beach, this little mystery is fine.

7 Reply to “Tell Me No Secrets by Julie Corbin”