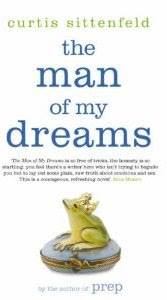 Don’t let the title mislead you. It’s not your typical chick lit run of the mill book this. The Man of My Dreams by Curtis Sittenfeld is about Hannah Gavener, whom we follow from she is 14 and until she is in her late twenties. The book begins in 1991 and ends in 2005. Hannah is being placed at her aunt and uncle’s house when her mother and father finally decides to call it quits – or rather, when her father throws out Hannah, her sister Alisson and their mother. This very unbalanced relationship with her father makes an impact on all Hannah’s future relationships with men, but also with women.

Her friends are all prettier than Hannah. No boys/men are interested in her. Her dreams about relationships are naïve even as an adult. And last but not least, the low selfesteem she will not admit she has, makes it impossible for her to really connect with the boys/men who actually does show an interest in her.

So her life circles around this, and the years fly by. Hannah becomes increasingly frustrated the older she gets, still not kissed and still a virgin. She looks at her big sister and her cousin, her sister getting married before Hannah has ever been on a date and her cousin who has numerous boyfriends all through her teenage years and beyond.

Hannah’s lack of self esteem and her not getting that first kiss/sex over and done with was beginning to annoy me halfway through the book. Its not that it felt phony or rang false. Not at all. On the contrary, it did ring true a long way through the book. Hannah’s life and her search for a boyfriend/a kiss/an intercourse is not that special – many older teenage girls/young women will definitely be able to identify with Hannah. Its more that I didn’t feel it was enough to keep a whole book running. Now The Man of My Dreams is not a long book, but I did feel that it dragged on a bit and I did feel that Hannah went from being a relatively normal teenager/young adult agonizing over boys and sex to become a somewhat neurotic woman. Anyway, its not a bad book, and Curtis Sittenfeld is a good writer. This was not my fave book though.

8 Reply to “The Man of My Dreams by Curtis Sittenfeld”