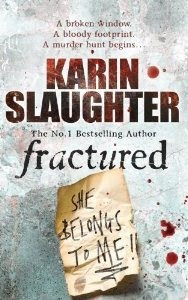 Fractured is the second book in Slaughter’s Atlanta-series. Main character is the dyslectic agent Will Trent with the troubled childhood, whom we saw introduced in the first book Triptych which I read pre-blogging. The third book which combine Slaughter’s two series the Grant County-series and the Atlanta-Series is called Undone, and I already read that one.

Abigail Campano is on the phone with her husband, arguing about his mistress, when she arrives home and finds her house broken into, blood on the floor and a young man with with a knife in his hand. Her daughter is nowhere to be seen, and within seconds the situation is completely out of control. Atlanta Police is called to the house, where they begin investigating. Abigail Campano’s husband is an important member of society – or rather, his father in law is – and soon special agents are called in to take over from Atlanta Police.

This does not fare well with the police, and it doesn’t get any better when detective Faith Mitchell is forced to work the case with the agent Will Trent. In their frantic search for clues they waste a lot of time, time which could save lives, but they manage to find leads and suspects after all. Question is whether they have found the right suspects or not?

An easily read thriller, well written and with a fine plot. Not Karin Slaughter’s best – I liked both Triptych and Undone better, but nevertheless a good read. So for an easy mystery with a good plot, this comes highly recommendable. Perhaps you will want to read Triptych first, where Will Trent is introduced.

8 Reply to “Fractured by Karin Slaughter”