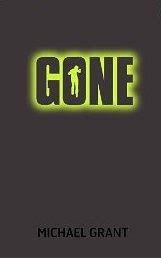 Gone by Michael Grant is the first book in a series that so far is planned to be of three books. The second one, Hunger, is already out, and the last one, Lies, should be out next month in the US.

It is a normal, boring day in the Southern Californian town Perdido Beach when everyone 15 years or older disappear in the blink of an eye. One second they are there, the next they are gone. The town is now at the hands of teenagers and children. After the initial shock wears off, the kids are taking advantage of the new situation. Candy shops are being looted, school bullies take over and threathens anyone who questions their superiority and in the middle stands Sam, a quiet young man with a secret, mostly just interested in surfing, his buddy Quinn, smart and pretty Astrid and her autistic little brother. The FAYZ – Fallout Alley Youth Zone – is as reality.

After Sam tries to rescue a little girl from a fire, he is immediately thought to be the new town leader, which is the last thing he wants to be. Some of the bullies has already taken over, and Sam does not really want to question their superiority. At least not at first. Only a day after everyone 15 years old or above has disappeared, a group of kids from the nearby Coates Academy, a school for difficult children, marches into town, and claim to be leaders with the calm, collected and somewhat scary Caine in front. It seems that some of the kids are developing special powers, and Caine and his allies need to control those powers, mainly for their own gain.

Gone has been compared to a modern Lord of the Flies – I don’t know about that. I know that I enjoyed reading Gone, and I know that I am also going to read number two, Hunger, which I have already bought. But Gone was not a super-fantastic read as such. The premise is very good and the plot well thought out, but only in theory. Reading Gone it felt just like that: A well thought out plot, but with the author loosing steam not even halfway through. The book is a YA-novel and the writing is aimed at a young audience. I don’t mind that at all, but all in all Gone is very gritty, and the plotline may appeal more to the older YA crowd, not the youngest ones, even though the writing feels aimed at them. I still recommend Gone if you want a dystopic YA story.

Gone has been read as part of the Twenty Ten Reading Challenge hosted by Bart’s Bookshelf. It has been read in the category Shiny and New, since it was one of the newest books in my stack when I compiled my list.

4 Reply to “Gone by Michael Grant”