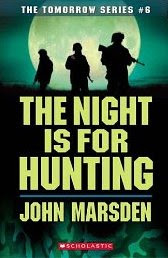 The Night is for Hunting is the 6th book in John Marsden’s Tomorrow Series about the teenager Ellie and her friends who find themselves in the middle of an invasion of their country after a camping trip to the Australian Bush. If you haven’t read this series and plan to do it, don’t read furter, since the review will contain minor spoilers about the previous 5 books.

In book 5, we left Ellie and her remaining friends in the larger city of Stratton, where they were holed up in Ellie’s grandmother’s house after one of their biggest guerilla attacks yet. In Stratton they were mugged by a gang of smaller kids, and now Ellie and the group are taking action. They want to find out who the kids are, they want to take care of them, even though the kids themselves are not overly interested.

Stratton soon becomes too dangerous to hide out it, and the group of friends must make a dramatic flight towards their old hideout deep in the Australian Bush, the place called Hell. In Hell they face a new set of problems which will put their friendship to the test. Christmas is also near, and they decide to celebrate the event even though it means dangerous expeditions to find food.

Meanwhile the war is continuing, and Australia is still invaded by enemy forces. Ellie and her friends are feeling the effects of war deeply now, and they dream of it to be over. They are still in regular radio contact with their allies in New Zealand, and just before book 6 ends, they receive a message which they cannot ignore.

Again John Marsden has managed to capture the spirit and the lives of this group of teenagers, caught in the middle of a war. A war that they decided to fight from day one, doing everything they could. In the first books in the series the group also tried to keep a certain level of normality, but in the later books they are so war-torn and shell shocked that it makes the books as believable as possible. There are not really any love stories between the teenagers anymore, instead they have become insufferable to each other in certain ways, and especially the way Ellie has changed during the war is shocking, not the least to herself. 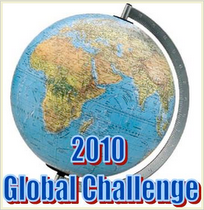 Great read, but read the five previous books first. This is read as a part of the 2010 Global Reading Challenge and is my book in the Australasian section.

4 Reply to “The Tomorrow Series # 6: The Night is for Hunting by John Marsden”