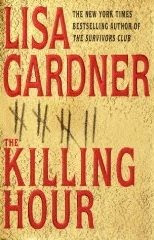 The Killing Hour has its moments. It is a fast read, the main plot is good and it is always interesting to be hot on the heels of an evil serial killer. But the characters are not really coming to life, and the usual ‘stubborn heroine with a troubled past’ is used too often.

Kimberly, the main character and heroine of the story, is a young FBI-trainee, and she is by coincidence and stubborness thrown into the investigation of a killer who has been killing for years. Kimberly is a troubled young woman with many demons, which is not making her life easier. She does not have any real friends, and her relationship with her father is neutral at best. When the serial killer starts dumping bodies close to the FBI training grounds, Kimberly cannot stay out of the investigation any more, even though her superiors has asked her to keep her nose out of it. Her father is an FBI agent who now has his own agency, and he suddenly shows up to help. Kimberly herself is also having personal motives to catch this killer, and while the time is running out, the clues comes together and it ends with a little twist which was just a little bit surprising. Hard core thriller readers will guess the identity of the killer long time before the final revelation.

This review has previously been posted on Amazon.com