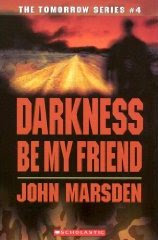 Minor spoilers if you haven’t read the previous books in the series and intend to.

Book Four in John Marsden’s fantastic Tomorrow series is called Darkness Be My Friend. And there is a lot of darkness in this one. Not just outside in the Australian bush, but also inside the very souls of Ellie and her friends Homer, Fi, Kevin and Lee. Australia has been invaded and more or less captured by the enemy for almost a year, and the different things happening in the previous three books are beginning to catch up with Ellie and the rest of the group. They have begun pondering what exactly it is they have done during their more or less guerilla attacks on the enemy through the three books, and they have begun to worry increasingly about their families who has been kept hostages and as workers for the enemy households since the invasion.

The hiding place in the Australian bush, a hidden site among mountains and forests called Hell, is once more the starting point for their adventures, which, in this book takes on a more professional air since they are being led by 12 soldiers from New Zealand. The enemy have now had almost a full year to spice up their war machine (and their surveillance skills) and the task the group of friends and soldiers are setting out to fulfill is the most dangerous yet.

After a breathless trek across paddocks and bushland during the darkest hours of the night, Ellie and co. find themselves in the one place they had not imagined they would ever see again, and here they start planning their next bold and dangerous move. I was again on the edge of my seat reading this, and I just think it gets better and better. As the title suggests, this one was the darkest one yet. Not much love, not too many jokes, it has become serious business, and the teenagers really mean business this time. Gone are the days where they sought to see the situation from the enemy’s side.

I am very curious as to how this series end, and I have three books left. I am going to order Book Five right away, and will probably read that during the seriespalooza I mentioned a few days ago. If I can stand waiting that is. 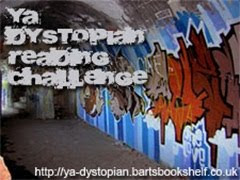 This is the 26th post in the NaBloPoMo-challenge. See my page here.

2 Reply to “NaBloPoMo # 26: Darkness be my Friend by John Marsden”