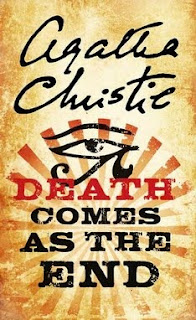 Death Comes as the End by Agatha Christie takes place in Ancient Egypt, and is about love and murder in a dysfunctional family around the year 2000 BCE. Its a fine and cosy mystery, and the scene set in Ancient Egypt shows us that when it comes to murder – and love – not much has changed since then.

This is the only book Christie wrote taking place in Ancient Egypt, but she wrote several with a Middle Eastern Scene, such as the well known Death on the Nile (legend had it that she wrote this while vacationing on the Old Cataract hotel in Aswan in Egypt. It is a fabulous hotel, closed these days for refurbishment, so the link goes to google image search) and Murder in Mesopotamia [Iraq] which centers around an archaelogical dig in Iraq. This is not so strange, considering that her husband was the world famous Near Eastern archaeologist Sir Max Mallowan, whom Christie followed around the world on archaeological expeditions.

Don’t forget to check out the Agatha Christie webpage, its full of great info and links.

This is the 15th post in the NaBloPoMo-challenge. See my page here.