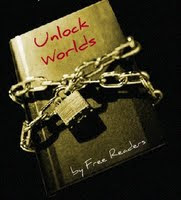 We don’t have a thing like Banned Books Week in Denmark – mainly because we do not ban books. Some may argue that we use our right to freedom of speech, freedom to read, say and do whatever we want (within the framework of the law) too much, and sometimes in a wrong way, but that is another debate, albeit an interesting one.

However. I have to say that I sometimes laugh when I see Where’s Waldo, Winnie The Pooh and dusty classics which cannot offend ANYONE in 2009 featuring prominently on various Banned Books Lists. COME ON!!!!

Yeah, I know that some of the “dusty classics” were written in a time where for instance racism was considered a-okay. And as Lynn (Chronicle of an Infant Bibliophile) also touches upon in her post from yesterday, it may be a good idea to discuss with your child why racial slurs were okay in time where Huck Finn was written and not today. And I agree wholeheartedly.

Trisha, the eclectic/eccentric reader has a fun challenge going, and I think you should check it out by clicking the link. It is a long term challenge involving books you may have read already – banned books that is. You should also take time to read Trisha’s thoughtprovoking post about book banning. I am taking the liberty to quote Trisha here:

“I am 100% against any form of overt censorship in public forums. No one has the right to tell me what I can or can not read, watch, or hear. If I, an adult, want to sit down with Madonna’s Sex book while watching Debbie Does Dallas and listening to some rapper talk about killing cops…well that’s my right. Now I’m not quite so loosey-goosey when it comes to those under 18. I’m pretty sure letting a 12 year old do the above is not necessarily the best idea, BUT when people no longer see the distinction between allowing a 12 year old to read Madonna’s Sex and freaking Bridge to Terabithia, we have a serious problem.”

I urge you all to travel around the book blogosphere, where there are many interesting posts up now about book banning. From what I can see, we all pretty much agree. It would be interesting to hear from the other side though.

The image is also from Trisha’s blog.