Are you a Tintinologist? I am. Although my knowledge of Tintin and the other characters from the Belgian Hergé‘s famous comic-book series cannot match a true Tintinologist’s – not by any chance.

Tintin comics are immensely popular all over Europe with both kids and adults, but I am not familiar with their popularity in Northern America, Australia and other places around the world. If you know anything about this, please enlighten me, as I am very curious.
In Belgium, in Louvain-la-Neuve, there is a Tintin-museum. Or rather, it is an Hergé-museum. What I find completely adorable is, that the museum is located on Rue du Labrador, which is the same street Tintin lives at in the series, although the town/city he lives in is not clear. I always suspected it was Brussels, but could be Louvain-la-Neuve of course. A real Tintinologist will know, so already here, I have failed ;o)
Late in the 1950’es, Tintin was launched in the US. This article is very well written and not too long, yet it gives all the details, and if you are just a bit interested, you should check it out. Here is a snippet from the article’s beginning:

In 1958 Georges Duplaix wrote to Casterman to express his interest in publishing
Tintin in the USA. At the time, the dust was still settling after the ‘horror
comics debate’. There had been articles condemning comic books since the
Forties, and a New York Senate panel had actually banned them in 1955. Comics
had been described as debased and semi-literate, and were accused of keeping
children from reading ‘proper’ books. This was probably not the best environment
in which to try to launch a major work of the comic-book tradition. However,
Tintin appeared to have a good, clean image, and he was becoming more and more
popular in Europe, so why not America? 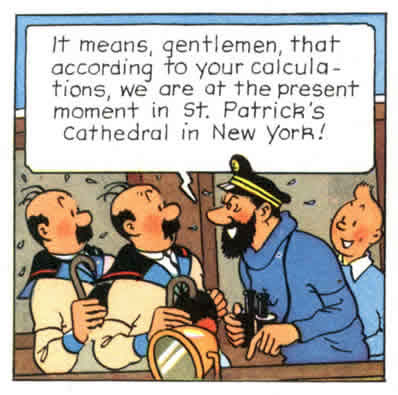 Also, don’t forget to check out the official Tintin-page. Some of it is in French, but the English version is adequate. Here you can see the map of where the different books took place, you can get an overview over the characters and see when the different books were published. The Tintin-albums has been read, researched, talked about and discussed for years. Recent years has seen the political correct removal of some of the alcohol, tobacco (and firearms, I almost wrote) and profanity in the albums, but not all “personality” has been taken out of the albums.

And you don’t have to be a Tintinologist to notice (if you get your hands on some of the old editions) the European outlook on the world back then. Please not that Hergé was neither nazi nor racist. But yes, some of the pictures in the albums strike us as racist today. They were not intended as such, Europeans just didn’t know better (some may argue they still don’t).
As a part of the Dewey Reading Challenge, I am re-reading one of the Tintin-albums – The Secret of the Unicorn – and will review it here shortly. This post is meant as a little forerunner to that review. I will also make a little post later with my fave characters from Tintin.
Have you read any Tintin-albums?
Belgian, Cartoon

10 Reply to “My passion for everything Tintin”