This weekend it’s about a bit of Egyptology and about showing a few pics from my recent trip to Egypt.

I left February 26. and returned March 12. First week was spent in Luxor with my sister, brother and nephew. Luxor is the ancient religious center in Egypt and many of the temples of Egypt are in and around Luxor on both the East and the West banks of the Nile. 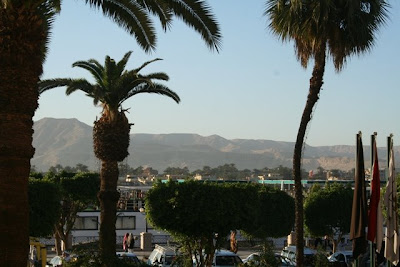 This ismage is taken from the East bank of the Nile, showing the mountains of the Western bank. The ancient Egyptians believed that the sun “died” each evening when it went down in the West and then travelled through the night to be reborn the next morning in the East. Thus the Western side of the Nile came to be considered the side of the dead, where tombs were dug deep into the cliff sides and temples celebrating the memory of the dead kings were build. 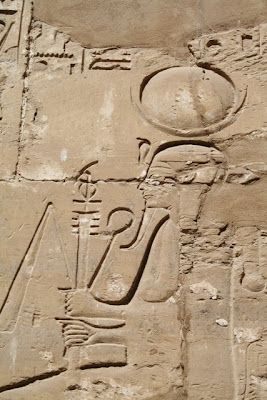 Our first tour went to the Karnak Temple (see previous Egyptology Weekend) where this snapshot is from. The temple housed the divine family of Amun, Mut and Khonsu. The image depicts Khonsu, who was the son of the family. He is here shown with the sidelock of youth, the false beard of the gods and the deceased (Pharaoh’s false beard is straight, the god’s and the deceased’s beards are “curled up” at the bottom). He wears a ureaus (a cobra-tiara so to speak) and the moon on his head and in his hands he holdes several royal and divine insignia symbolizing power, might, life, stability etc. 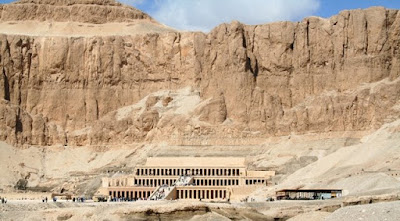 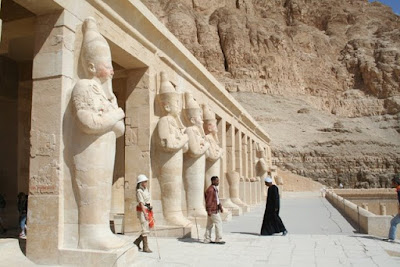 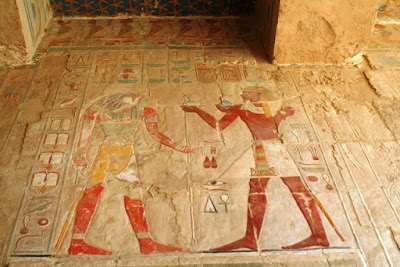 We also went to the Memorial Temple of Queen Hatshepsut. This queen, who ruled in the 1400’s BC, put herself on the pharaonic throne instead of her family-member, crown prince Thutmosis III, who was only a child when the old king died. A queen substituting on the throne in ancient Egypt is if not a usual thing, then something which had been seen before and as such not unique at all. But the unique thing in the case of Queen Hatshepsut was that she began depicting herself as a pharao and as such taking the (100% male) role of a king. She acted as a male ruler (the pharaonic role/rule/reign is male and thus it is weird for a woman to take that role, the weird thing was not that she ruled Egypt) for about 20 years, during which the real king, Thutmosis III, probably became more and more agitated with her, as he was the real pharaoh, not Hatshepsut. Hatshepsut’s reign was a peaceful one – and one of her largest claims to fame was her expedition to the Land of Punt (probably Somalia or Eritrea of today) for flowers, trees, perfumes, exotic animals and incense. She build a large Memorial Temple in the steep cliffs of the location called Deir el-Bahri today. 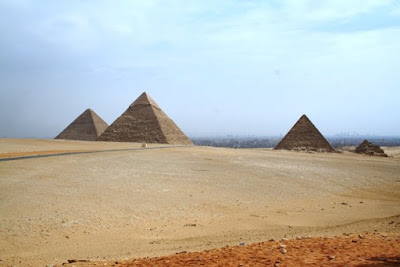 One day during our vacation, we flew from Luxor to Cairo, Egypt’s immense capital city, “Mother of the World”, the second largest city in the world. Just outside the city lies the Pyramids of Giza, which are the most famous pyramids of Egypt, even though there are about 90 more pyramids to visit in Egypt. The largest one, the pyramid of Kheops (or Chufu which he is often called in English) is the one in the back. It’s about 138 meters high today, but it was originally 147 meters high. It has lost it’s top, probably already in antiquity. The pyramid of Kheops is the sole remaining wonder of the ancient world of Seven Wonders. The pyramid in the middle, which looks taller, was build for king Khefren (or Chephren) and the smallest one was build for king Mycerinus. All pyramids are build as tombs for dead pharaohs. Later in the history of ancient Egypt, the pharaohs were laid to rest in tombs, cut into the cliffs in what is known today as Valley of the Kings. This valley is also in Luxor, but will be the subject of another Egyptology Weekend. 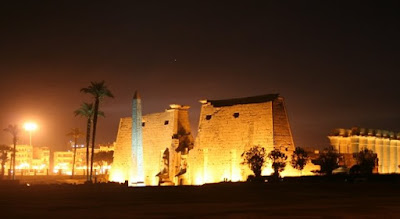 The image above is of the Luxor Temple. This temple lies in the middle of the modern town of Luxor, which was also the case of Ancient Egypt, except the town was called Waset back then (it was the later Greeks who named it Thebes and the even later Arabs who called it al-Uqsur/Luxor). The temple is floodlit at night which is a magnificent sight. In ancient Egypt, the temple was connected to the Karnak Temple through an alley flanked with Sfinx-figures and the temple was used when the gods of the Karnak Temple came visiting the Luxor Temple once a year at the special Opet-festival. Pharaoh also took part of the Opet-festivities and rituals in the Luxor Temple, in fact, he had a very important role, as it was him who, in the most secret part of the temple, re-newed his aquaintance with the gods and thus secured stability, wealth and true worldorder for Egypt for yet another year!
-Week two in Egypt was work aboard a Nile Cruise as a guide and tourleader. Perhaps more about that another time.