This weekend my topic is the huge Temple of Karnak. The temple, which is actually a whole complex of temples, is one of the largests temple-complexes in the world. It is about 1.5 kilometers long and almost one kilometer broad. It is located in the modern town of Luxor in Southern Egypt on the Easterne bank of the Nile. In ancient times, the main part of the temple was dedicated to the god Amun and his family: his wife Mut and son Khonsu. Amun was one of the most important gods of ancient Egypt, so it is not wonder that this temple is so huge. Below is an image of the ground-plan of the temple. 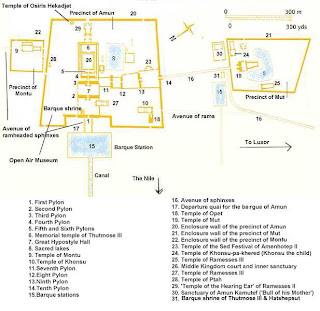 The temple was founded around 2000 BCE and for the next 2000 years, almost every pharaoh build, demolished, extended and maintained this temple. Today, the ruin is by far one of the most magnificent ruins of the world. Below you see the facade of the temple. Upon entering, you walk down a long avenue of sphinxes and enter through a large pylon which is the gateway into the temple. 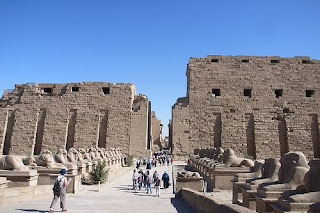 This image is from flickr and is shot by the user Yi-Chen.

Most Egyptian temples are build from the same “master-plan”. There is a row of features, that you’ll find in most temples. One of those features is the pylon, fronting every temple. This one in Karnak is huge. You can see niches as well as windows in the pylon. Long, thin flagpoles were placed in the niches and they were tied up from the windows so that they would not break. Usually, a pylon is decorated with reliefs of various gods and goddesses and pharaoh smiting enemies in front of the gods. But the pylon in the Karnak Temple was never finished, so it has no decorations. Below is an image of one of the most famous features in the Karnak Temple: The great columned hall. 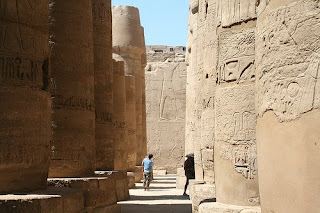 The hall was build by the pharaohs Sety I and his son Ramesses II. It is impossible to show an image or to describe just how enormous this hall actually is. It is a virtual forest of columns, more than 100, some of them more than 20 meters high. In ancient times, the hall had a roof and it symbolised the plants, the fertility, along the Nile. Some of the relief on the columns are very pretty, like you can see on the image below. 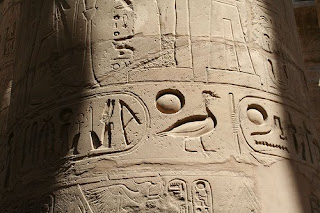 The duck and the sun disc spells Sa Ra, meaning Son of the Sun God Re. Immediately in front and behind the Sa Ra-glyphs, you can see the cartocuhes (name-rings) of pharaoh Ramesses II. The glyphs then means: Ramesses II is the Son of Re (but then again all pharaohs were sons of Re anyway).

The temple, like every other temple, also had a Sacred Lake, where priests could purify themselves before attending to rituals. You also needed obelisks, long, thin stone-poles pointing towards the sun and inscribed with whatever name of the pharaoh who gave the obelisk to the temple. 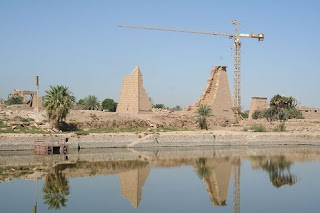 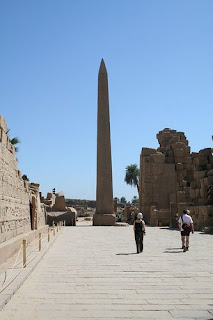 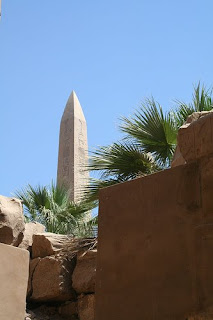 Karnak Temple was called Ipet-Isut in ancient times. That means “Most Select of Places”. Today, this ancient holy ground is still a very select place, visited by thousands and thousands of tourists every day. But it is so huge that it rarely feels crowded. Or at least you can always find a spot where, if you really strain your ears, you can still hear the footsteps of priests and workers echoing down through the millenia ;o) And there is so much more to be said about this temple, that it will end up being a very, very long post if I do not stop now.
Wikipedia has a decent article here and the Tour Egypt website describe the temple here. You can see my flickr images from the temple here.
For the coming two weekends I’ll actually be in Egypt, so no Egyptology Weekend, as I will not be able to be online every day.