Welcome to yet another Egyptology Weekend-post, although today is Monday.

This time a little info about the jackal-headed god Anubis.
“The spiritual world created by the ancient Egyptians was a richly fascinating one which remains unique in the history of human religion. The character of that spiritual world was both mysterious and manifest, at once accesible and hidden, for although Egyptian religion was often shrouded in layers of myth at ritual it nevertheless permeated the ancient civilization of the Nile and ultimately shaped, sustained and directed Egyptian culture in almost every imaginable way.”
Anubis, the jackal-headed god who is found in numerous cartoons, computer-games and horror movies as one of the “bad guys” is actually the complete opposite. Despite his somewhat demonic looks, he was one of the “good guys” in the ancient Egyptian pantheon. 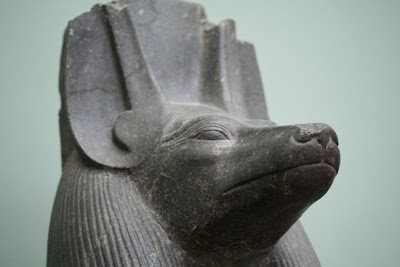 The image above is taken at the New Carlsberg Glyptotek in Copenhagen. It is the head of a life-size (human size) statue of Anubis. His head is a jackal and his body is human. 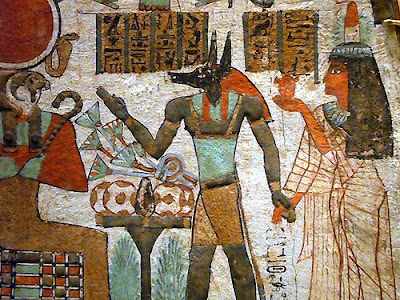 Above you see Anubis leading a deceased lady. She is dressed in fine, transparent linen and wears an elaborate wig and a perfume-cone on her head. The image is from Metropolitan in New York and has been taken by flickr-user ggnyc.

Anubis was also God of Embalming. He was master of the per wabet, which was the ritual tent or pavillion, where the deceased were embalmed. According to myth, it was Anubis who made the mummy – the first mummy – which was that of Osiris who then became ruler of the netherworld and thus he became God of Embalming. 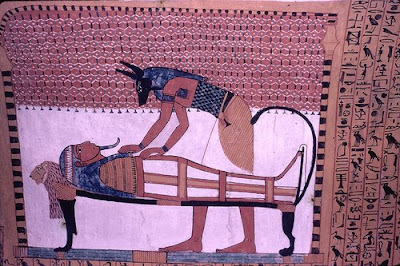 The image above shows Anubis preparing a mummy. The image is a tomb-painting and has been photographed by flickr-user pjwar.

Anubis was also guardian of the Necropolis and had a number of other “jobs” that he had to take care of.
Anubis is usually depicted as a man with a jackal’s head or as a jackal resting on top of a shrine.
If you want to read more about Egyptian gods and goddesses, I recommend: The Complete Gods and Goddesses of Ancient Egypt by Richard H. Wilkinson, from where I have also taken the long quote in the beginning of this post. 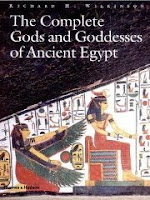