Welcome to the first post in Egyptology Weekend @ Lou’s Pages. Every weekend I will write a shorter or longer post about something Egyptological. It can be a certain period, a certain piece of architecture, a certain ritual, a certain person, a certain collection or museum etc. I will also recommend books for the interested reader. The books can be anything from a museum catalogue over a guidebook to an academic paper or work. If possible I will also recommend links further reading. I hope you will enjoy reading this weekly feature here at Lou’s Pages. This feature is not meant to be an academic tour de force through Egyptology. Its for fun!

This weekend I have decided to write a bit about the vizier Ramose. 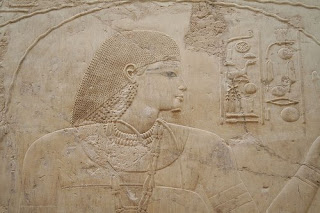 Ramose was a courtier and a nobleman during the reigns of pharaohs Amenhotep III and his son, the heretic Amenhotep IV/Akhenaten (whom I will feature in a future Egyptology Weekend). His large, rock cut tomb is located in the hills of the village Sheikh abd-el Qurna in Luxor, Egypt (ancient Thebes). Below you see an image of his (much restored) tomb as it looks today. It was cleared in the 1920’s and is famous for its magnificent wall carvings, which were never finished. Ramose probably died before the workers were able to paint all the carvings in the traditional, bright colors. 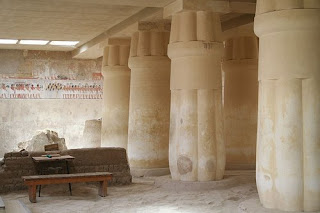 Some of the scenes painted on the walls in his tomb has been painted though. Those are the paintings showing the funeral procession of Ramose. On the first image below, in the middle you can see men carrying chests on their shoulders. In them, all the things Ramoses needed for his afterlife were stocked. And also notice the man with a chair on his shoulders. He is holding a scribe’s palette in his hand. Basically, Egyptians believed that they would be born again in a netherworld which had many similarities to the earthly life. And in this netherworld, they would need the same items, not to mention food and drink, in order to survive in the netherworld and not “die the second death”. One way of getting what you wanted in the netherworld was to have your family offer those things on a daily/weekly/monthly basis, another way was to bring a lot of stuff with you in your tomb and a third way was to have those items painted on the walls of your tomb. Magically, those things painted or carved on the walls would come “alive” in the netherworld, should your family forget their duties (and they probably did, at least over time), and thus grant you whatever you needed for all eternity. 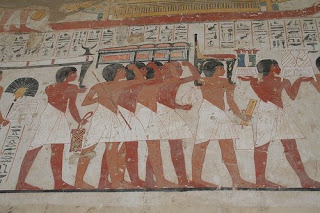 Naturally, a person as important as Ramose, he would also have professional mourners at his funeral procession which you can see on the two images below. 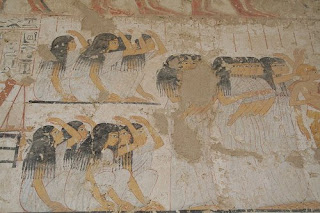 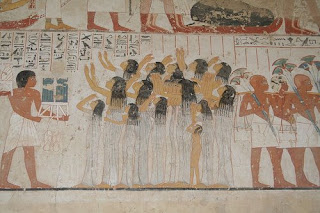 Looking at the timeline, we are in what Egyptologists, Archaeologists and Historians call The New Kingdom, Dynasty 18. The New Kingdom is the period which spans from circa 1539 – 1075 BCE. 18th Dynasty (circa 1539 – 1292 BCE) is the first dynasty (a dynasty usually covers an unbroken line of a single ruling family, but there are loads of exceptions to that rule) of The New Kingdom.
Ramose was in office between circa 1390 – 1336 BCE
If you want to search the net for more about Ramose, then his tomb has number TT 55. TT stands for Theban Tomb.
For an outline of Egyptian history, I recommend The Oxford History of Ancient Egypt by Ian Shaw (ed.). It can be purchased in a cheap paperback version and can also be found used many places.
————————————————————————-
All images are from my own flickr-photostream and the set called Tomb of Ramose. To see all my images from that tomb, click on the link.