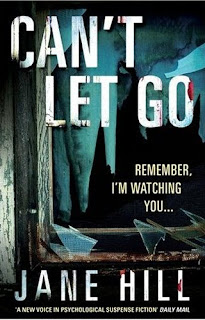 Jane Hill is an English writer I sort of “discovered” earlier this year. I am fairly sure she is not read by a North American audience, as I can only find reviews on the British Amazon.co.uk. And not that many by the way. I kinda liked her two previous “crime” novels Grievous Angel and The Murder Ballad and reviewed them here and here. So if you go check those reviews out, I don’t have to say again, that I really don’t think they are crime novels as much as I think they are chick lit. Nothing wrong in that at all. They are probably a combination between the two.

Can’t Let Go is build slightly different than Ms. Hill’s previous novels. But they share at least one thing in common: they all have a somewhat bitter slash frustrated heroine in her mid 30’es. In this one, her name is Beth Stephens and she is a mousy teacher at a girl’s school. Mousy she is and also an expert of blending in and not making any fuss about her own person. She is also paranoid and has been running away from her demons for the past 17 years. Because when she was 18, she killed a man and got away with it (not a spoiler, this is revealed on the front flap of the book). So Beth has spent her life since then hiding from…..? Thing is, she really doesn’t know shy she is hiding. No one has ever come for her, nothing has ever happened since she killed a man and got away with it. We enter her life as she is on the verge of trying to get into a normal kind of life instead of a life filled with paranoia.
By sheer coincidence, she befriends the feisty stand up comedian Zoey and then the book begins to drag on and on and on. Beth begins receiving threatening notes and it looks like someone has finally figured out that Beth Stephens is not exactly the mousy teacher she has made herself into. But instead of taking up pace, the reader is dragged from one stand up joint to another with Zoey and Beth and are learning about how to do stand up while their friendship develops. Booooring.
The final pages are marginally interesting and I also liked the way things wrapped up, now that they sort of had to be wrapped up, but in conclusion, I really do not think that there was much of a story! I wasn’t nearly as entertained as I had been with Jane Hill’s previous novels. But I may still try her next one.
British, Chick Lit, Crime/Thriller/Mystery, Fiction