I have always read cartoons. Tintin, Lucky Luke, Asterix, Donald Duck etc. Not too many of the more “fancy” cartoons, where the storyline was aimed at the mature reader, but more likely the fun stuff which some may claim is drawn and written for kids (I know many who will agree they are also for grown ups though). As the graphic novel has gained more and more popularity, I became interested in seeing what it was all about, and heard from my brother that Maus by Art Spiegelman was a fantastic graphic novel, which had even won the Pullitzer Prize (in 1992). So I put it on my wishlist for Christmas and got it.

I began reading this chilling story on the eve of the 24th and finished it 4 days later. What a great read – a read I haven’t been able to get out of my mind since then. I am relatively familiar with the history of World War II, The Holocaust, the KZ-camps etc, but not on a level where I am able to discuss the manueverings of politics and such things. But that wasn’t a p 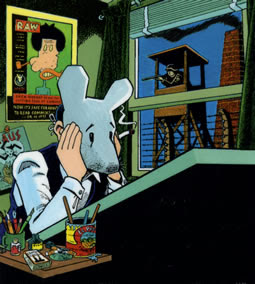 roblem “understanding” Maus!
In short, Maus is about Vladek and Anja, Polish Jews. Vladek and Anja lives in Poland when the Second World War breaks out and we follow them, first as members of wealthy Jewish families, then living in a Jewish ghetto in Poland, their deportation to Auschwitz and at last their life in Queens, NYC. It is Art, their son born after the war in Stockholm, Sweden, who tells (draws) the story of his parents and their lives during WW II. Half of the story is also about Art’s own life in our day and age and his problems with his ageing, nagging father Vladek, survivor of Holocaust, whom Art finds unbearable to be around for too long. Guilt is an underlying (and at places not underlying at all) theme through the whole story: Vladek’s guilt of being a survivor, Art’s guilt of not being able to stand his father and the guilt both Art and Vladek carries around because of Anja’s suicide (this is not a spoiler, we know this from the beginning of the book). But Maus is also about love, it is not just about despair and horrendous things.
Is it wrong to say that I loved this story? It’s rawness, the somewhat rough drawings, the absolute horror of the story and the humorous streak running through a lot of the pages? I don’t know, but I did. I really loved it. Has also given me much to think about although what was describes wasn’t news for me at all and despite the fact that the book has been out for 20 years or so. But if you haven’t read it already, you should. 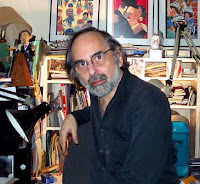 Read much more about Art Spiegelman here where I have also taken the image of Art Spiegelman as a Maus (Jew). The other Spiegelman image is from The Harvard Gazette.
American, Graphic Novel, Memoir

4 Reply to “The Complete Maus by Art Spiegelman”