One of my favorite reference-books in my work with Ancient Egypt is A.G. McDowell’s Village Life in Ancient Egypt: Laundry Lists and Love Songs.

A.G Mc Dowell has written a book about the workers who build the tombs of the kings and queens of Egypt’s New Kingdom (circa 1550 – 1075 BCE). Those workers, whose daily lives we follow through a wealth of original written sources, lived in a village; today the ruins are called Deir el-Medina, back then the village was simply called “The Village”. The workers lived with their families in small houses in Deir el-Medina, and while their main concern was building the tomb of the Pharaoh, they also had all the problems and sorrows and joys as modern people have. We can read about their problems with superiors at work, their love life, marriage, kids, sickness and about their interest in suing each other for minor crimes! While this book use the original sources, Mc Dowell explains each little text in a modern and easily understood language, and this book is for everyone who wants to know how the Ancient Egyptians lived more than 3000 years ago. 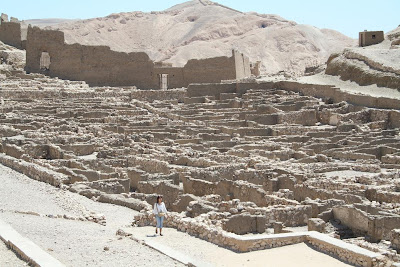 The ruins of the village on the West Bank of Luxor, old Thebes.

This is post # 17 in the NaBloPoMo-challenge. See my page here.